I didn’t intend on wri 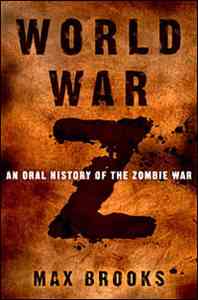 ting a review for World War Z when I started reading it. In fact, I didn’t intend on taking the book very seriously at all. World War Z was actually just an impulse purchase I had made months ago because it was in the dollar bins outside BMV. I only picked it up because I wanted to start reading again, but all of my unread books were the dense books I’d already been unconfident about reading.

I’m surprisingly happy that I did. I didn’t expect much out of a zombie novel, already disenchanted by the mass of zombie narratives already out there. What was most interesting to me was that it had a global perspective, and I wanted to see how a book could be in the oral tradition. I feel like I should also mention that I also realized that it came out in 2006. I’m not only a decade late, but I didn’t even realize it.

I always enjoy new formats in books. Reading it as interview transcriptions allowed it to be easy to follow along, but was used effectively to create subtext with the interviewer’s questions. Not only that, but instead of telling the story of just one character throughout the war, it instead showed the lives and perspectives of many.

This is where World War Z became an amazing book. In most zombie narratives you have a group of able-bodied middle class and usually white Americans as they fumble along trying to survive. That’s not this book. They had characters from all over the world. Reading about Indian war heroes, and the racialization of the virus (which was nicknamed “African Rabies”, an allusion to many instances in history where African was synonymous with deadly).

And then they had Joe Muhammed. Joe Muhammed is a disabled Pakistani man. They don’t mention why he’s in the wheelchair, if it was a wound or from an injury from before. What they do mention: “Shit, if I couldn’t roll myself faster than a walking zombie, how could I have lasted this long?”

Exactly this. Everything about this. This is the first time I have read about a disabled character in the zombie apocalypse. Being disabled myself, I wanted to goddamn cheer (in fact I did stop and very enthusiastically waved this book around in my partner’s face shouting, See!) when I finally read one and it was about the benefits of having a chair.

And not only that, but later they introduce a blind man who had been visually impaired since his childhood. He recounts a time when he first started to encounter zombies. It was great, reading it from his perspective. There was a clear change language to denote the perspective. Everything he experienced was from sound and smell. And again, he says, “Losing my vision also prepared me for the act of ever-vigilant mobility. Those with sight have a tendency to take walking for granted; how else could they trip over something they’ve clearly seen?”

While there was more of a focus on the American front than I would have liked, it was such a great read. Between the tongue-in-cheek social commentary, and the diverse characters, and those moments where you’re thinking to yourself, huh I never would have even thought about that, it’s a fantastic read.